Here's the latest news from Trickbox

Trickbox TV is pleased to provide broadcast studio space for the Jacksonville Jaguars in London for the second year running. The Jacksonville Jaguars’ fifth round selection in the 2016 NFL Draft will take place on Saturday 30th April from Tower Bridge TV Studios, providing an iconic London backdrop to the Draft.

Each year, NFL teams develop their player rosters by selecting college players.  This takes place over a three-day period known as the NFL Draft. For Florida’s Jacksonville Jaguars, the only team to have two home bases, choices are announced not just at EverBank Field in Jacksonville, but also in London, a city in which the team has committed to play one home game each year until at least 2020.
The Jaguars’ use of London reflects the team’s continued commitment to honour its UK fan base after making NFL history last year by having draft picks announced outside the US for the first time. The tradition is upheld this year, as a Jacksonville Jaguars fan has been chosen to announce the fifth round draft selection from Tower Bridge TV Studios in a live broadcast for the US NFL Network and its production partner, Sky. Millions of viewers worldwide will witness the announcement from the lucky fan, who will be joined by Jaguars player Michael Bennett, a draft selection from last year.
“The increasing support from the NFL UK fan base is evident and it’s great that Trickbox TV can help to be part of that spirit, providing a backdrop that represents London at its finest,” said Liam Laminman, Managing Director of Trickbox TV.
Mark Lamping, President at Jacksonville Jaguars, said: “The Draft plays a huge role in the Jaguars’ preparations for the new season.  We were delighted to be able to make history last year by taking a Draft announcement to London.  Given our extended commitment to play in London every year until at least 2020, it seems fitting that once again we’re giving one of our UK fans the chance to share in the excitement of the Draft and the NFL.”
During the 2016 season, the Jaguars will head to Wembley Stadium to play the Indianapolis Colts on Sunday October 2. For more information about the Jacksonville Jaguars visit www.jaguars.com/UK 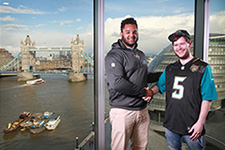 Trickbox TV, the broadcast equipment and services provider for studio and location multi-camera production, is delighted to have become a member of EVCOM effective immediately, strengthening its presence within the events and visual communications industry.

EVCOM is Europe’s largest trade association for the corporate communication, film and digital and events industries. Fellow members of EVCOM association includes leading producers of film, digital communication and events as well as clients to the industry, suppliers such as venues and technical supply as well as freelance individuals.

Trickbox TV is pleased to bring its full range of production outside broadcast equipment, crew and multi-camera services and knowledge of the industry to the association, as well as offering Tower Bridge TV Studios as a venue for EVCOM events. The first of these events, the EVCOM Freelance Forum 2016 – For freelance and individual members and the agencies that employ them takes place on Tuesday 5th April at Tower Bridge TV Studios. You can find out more about the event here, and EVCOM here.